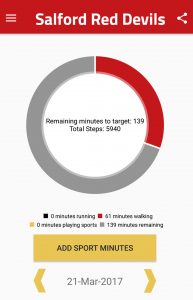 Anyone using the new Red Devils Fan Fit app can win prizes and get fit at the same time.

The app allows supporters to create some friendly competition around fitness while interacting with other fans and enjoying the latest information from their clubs. All that is needed is a smartphone, either Android or iOS. Red Devils Fan Fit can be downloaded here.

We want to challenge their fans to see who can do the most exercise in December and January.

Ian Blease, Director of Rugby and Operations, Salford Red Devils, said: “This is a great opportunity to get a bit fitter in time for Christmas and then to lose those festive pound in January too!

“We will be tracking everyone who has signed up in the past few weeks and whoever does the most steps and wins the monthly league during December and January will win some great prizes. It’s a great way for our fans to pass the time while there is no rugby on!”

As well as the fitness tracker the app provides video, social media and news feeds, and fixtures and results, so fans can keep in touch with the latest club new news while keeping fit at the same time. The new version features integration with Garmin wristbands. In order to claim their prize, the winners and the runner ups will be invited to Salford Red Devils home the AJ Bell Stadium and will also get a photograph or video of their winning moment!

Dr Alex Fenton, designer of Fan Fit and lecturer in digital business from the University of Salford Business School, said: “Since we launched at the beginning of October hundreds of people have already signed up to Fan Fit and are having their exercise levels tracked. Now they can win prizes while doing it.”

The North West as a whole recently came near the bottom of league tables for health and fitness, with rates of heart disease and stroke among the highest in the country. Sports clubs in the region believe they could be doing more to combat this, as a duty of care to their fans.

For more information or for other clubs interested in signing up to Fan Fit should contact Dr Alex Fenton at a.fenton@salford.ac.uk